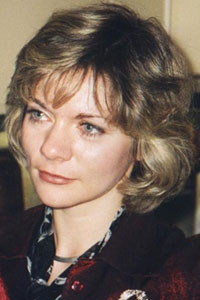 Natalia Guseva today.
Natalia Yevegnievna Guseva (Ната́лья Влади́мировна Гу́сева, born 15 February 1972 in Zvenigorod, Russia) is a Russian actress famous for her role as Alisa Selezneva in Guest from the Future, a Science Fiction miniseries based on the works of Kir Bulychev. She had appeared in some small movies, but became an instant star with the release of Guest from the Future, which resulted in "Alisomania." She resigned from acting at the end of the 1980s when producers began offering her roles that in her words "would dirty the bright image of Alisa" and instead studied to become a scientist. She has recently returned to acting with some small roles. She lives in Moscow with her daughter Alesya, and is still involved in the fan community.

Tropes associated with this actress's work: