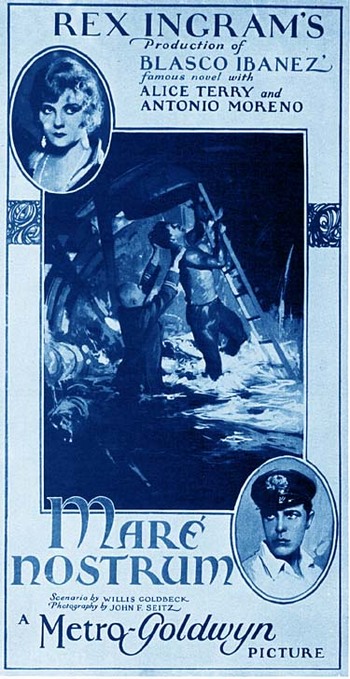 Mare Nostrum is a 1926 film directed by Rex Ingram.

The extravagantly named Ulysses Ferragut (Antonio Moreno) is a Spanish sea captain. He is stuck in a loveless arranged marriage with his wife Dona Cinta; they have one son, Esteban. At the beginning of the film Dona Cinta, who does not approve of her husband living a seafaring life, has prevailed on him to quit. Those plans are short-circuited when World War I breaks out, making merchant shipping way too profitable to quit.

While in Italy after having dropped off his cargo, Ulysses meets Freya Talberg (Alice Terry), a stunning beauty who bears a startling resemblance to the portrait of sea goddess Amphitrite

that hangs in his home. Ulysses falls deeply in love with Freya, who turns out to be an Austrian spy. Ulysses is so in love that he joins her in espionage, getting involved in espionage himself, transporting a load of diesel fuel into the middle of the Mediterranean for the clandestine refueling of a German U-boat.