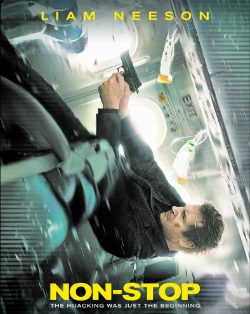 "I'm not hijacking this plane, I'm trying to save it!"
— Air Marshal Bill Marks
Advertisement:

On a routine commercial transatlantic flight, U.S. air marshal Bill Marks begins receiving threatening texts from an unknown passenger, promising to kill one person every twenty minutes until $150 million is transferred to a specified account, an account that turns out to be in Marks' name. Now with suspicion mounting against him, he must find the killer, clear his name, and do it while protecting all the rest of the passengers.

The following tropes are included on this flight: