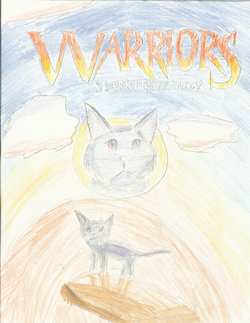 ◊
For the record, nothing as down-to-earth as StarKit's face emerging from a circle in the sky happens in this fanfictionnote ... until the epilogue, when it does.
"And he held out... SOME JEW!"
Advertisement:

) is a Warrior Cats FanFic that chronicles the life of StarGleam, StarClan's chosen one, from her apprentice ceremony onward. She deals with such trials and tribulations as a Love Dodecahedron with Firestar, Graystripe, Blackstar, Hawkfrost, and Ashfur; the threat of Hollyleaf and Tigerstar as they try to take over the forest; and attempting to convert the Clans to Christianity. Somewhere along the way she discovers that she (along with the author) is a lesbian, becomes leader of ThunderClan, and dies multiple times.

It is a full-on Random Events Plot. If you really feel you must attempt to make sense of it, go ahead and read it yourself.

Dramatic readings have surfaced. They can be found here

. Also has an animated version

The author has also started a sequel, titled Starkits Prophecy 2 The Two Siblings. A new Clan called MapleClan is introduced. Stargleam and some other characters from the first fic are in StarClan, and they receive a new prophecy to pass on to the Clans. Sadly, it has since been deleted.