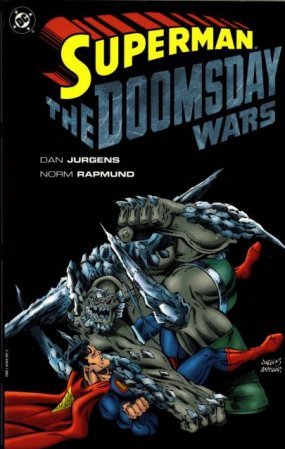 Superman: The Doomsday Wars is a 3-part mini-series released by DC Comics written and drawn by Dan Jurgens, published in 1998. It is the third part of the "Doomsday Trilogy" saga started in The Death of Superman and continued in Superman/Doomsday: Hunter/Prey.
Advertisement:

After a fight with Brainiac, Superman gets a call: Lana Lang had been in a car accident, causing her to prematurely give birth. Confronting his old friend, she begs him to save her child's life. At the same time, the Justice League is called in to the scene of a disaster, only to find themselves face to face with... Doomsday?! But, he was shunted into the end of time! How did he survive?!

This series provided these tropes: