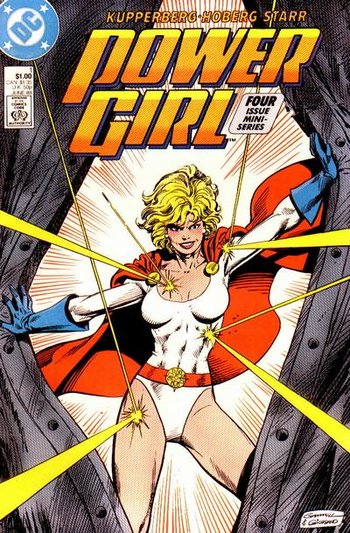 Power Girl (1988) was the first series featuring Power Girl, the Supergirl from Earth-Two. It was penned by Paul Kupperberg -who had previously written another incarnation of the character- and illustrated by Rick Hoberg. Kupperberg, who came up with Power Girl's new origin in Secret Origins Vol. 2 #11 (1987) -which incidentally tied Power Girl with his own creation Arion-, would use this mini-series as a vehicle for delving into Power Girl's new Atlantean connections and introducing a new status quo for the character.

After spending years believing she was Superman's cousin, Kara Zor-L has been told her memories from Krypton were a lie concocted by her alleged grandfather Arion to protect her. Feeling shaken and confused, Kara tries to keep her mind busy by focusing on her Karen Starr identity and her civilian job, but the threat of a hostile takeover, as well as a sudden surge of super-villains, will ensure that she cannot have a moment of respite.

Soon it becomes clear that Kara is being harassed by someone who knows her secret identity and is trying to destroy her life before killing her. After several battles, Kara learns her mysterious enemy is a chaos god called the Weaver who was banished by Arion to another dimension several millennia ago. Unable to exact revenge on the deceased Arion, the Weaver intends to punish Arion's alleged granddaughter for the wizard's "transgressions".

Kara knows the Weaver is trying to lure her into his dimension-prison, where he is omnipotent and can destroy her with his own hands instead of through minions and chaos-manipulation, but she has no option but to take the fight directly to him by going into his domain.