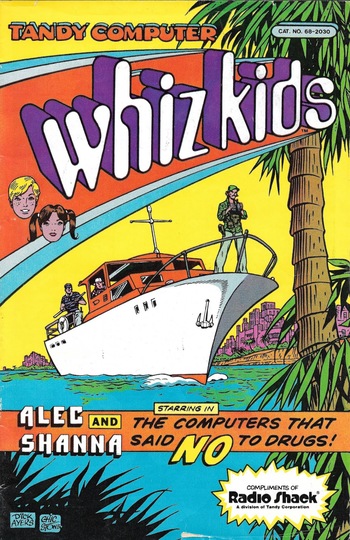 The Tandy Computer Whiz Kids series was a series of promotional comics published by Radio Shack from 1980 to 1991, and produced initially by DC Comics, then later by Archie Comics. In them, the two titular Whiz Kids, Alec and Shanna, teach their class (and by extension, the audience) about Tandy computer products and occasionally other topics (substance abuse, child kidnappers, environmentalism, etc.)

Eight issues were made for the main series by Tandy, along with three tie-ins with DC featuring Superman, Supergirl, and Wonder Woman (with the two, along with their teacher, also appearing in a regular edition of Superman in 1981).

While originally largely obscure, the comic series became far better known after being reviewed (and ridiculed) by Linkara from Atop the Fourth Wall.