Comic Book / Must There Be a Superman? 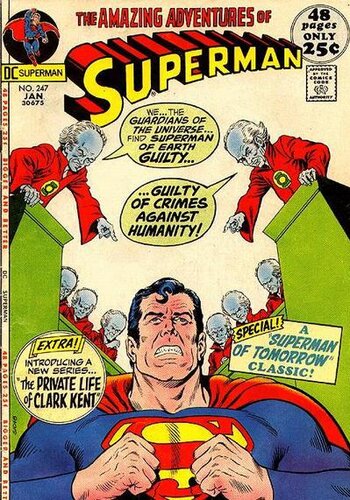 Let's get something straight! Sure— I rebuilt your homes, but that's because an earthquake is something you can't handle— Something you can't safeguard yourselves against— But you must not count on a Superman to patch up your lives every time you have a crisis— or disaster—
— Superman
Advertisement:

Must There Be a Superman? is a Superman story published in Superman (Volume 1) #247. Elliot S! Maggin wrote the plot and Curt Swan and Murphy Anderson handled art duties. It is widely remembered as the story which opened Maggin's seminal Superman's run.

After Superman helps the Green Lantern Corps out with an emergency, the Guardians of the Universe show him around Oa, subtly hinting that he may be involuntarily disrupting Earth's social progress by making humans too dependent on him. Feeling troubled, Superman leaves Oa, wondering whether he is indeed causing more harm than good.

Superman makes it back to Earth and lands on a Californian village, where his worst fears are confirmed: the villagers absolutely expect him to solve all their issues, from punching a mean plantation owner on the face to fix a roof leak. Superman is about to explain why they should not wait for a superhero accidentally dropping by and solving their problems for them when suddenly an earthquake strikes the area.