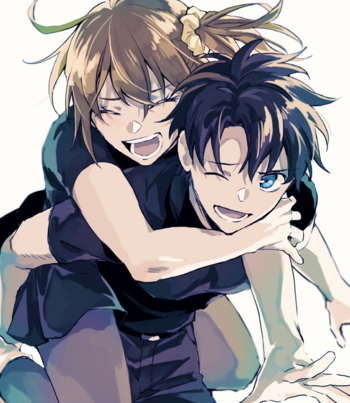 A rare moment of good-humored affection between Kana and Ritsuka Tohsaka. note Image by @の助 (Source)

When the world of 2026 burned, Chaldea alone survived
Charged with the Grand Order, it now sails through the kaleidoscope, searching for the seven singularities
Hoping that their efforts will earn the salvation they hoped for
And that their quartz will hold out long enough to summon the Heroes that will save them
This is....
FATE/SUNNY ORDER

is a Fate/Grand Order Slice of Life fanfiction by Swordomatic, while being simultaneously a distant "sequel" to the Unlimited Blade Works route (specifically the "good ending" where Saber survives) of Fate/stay night. It focuses on the daily lives of Ritsuka and Kana Tohsaka, children of Rin and Shirou and Chaldea's only active Masters. The entire thing is an utterly ridiculous slew of jokes and memes surrounding all things Fate and many others besides.

The main story of FGO is covered in sidestory chapters to allow the fic's main story to focus entirely on abridged-style antics. Expect extreme exaggeration of anything and everything.