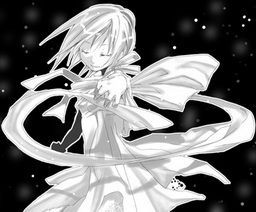 Ballad of an Evening Butterfly or Yachoukitan is a dark, Gothic, and short visual novel by Zig-Zag.

It's about the amnesiac Kaoru Sera who wanders down a flight of stairs into a forest and stumbles upon a ominous, old looking western style mansion. He opens the gate and enters the house and is greeted by a stoic boy clad in black who is surrounded by black butterflies. The boy introduces himself as Yoru Mutsuki. He lets Sera in and gives him a job to do, which is to occupy a girl locked in a basement. Yoru then gives him the keys to the basement where he finds the albino girl in white, Chou. After he finishes this task, Yoru tells him that Chou is a ChouTsuki (a vampire-like species) and Kaoru was brought to be her sacrifice.

Ballad of an Evening Butterfly provides examples of: