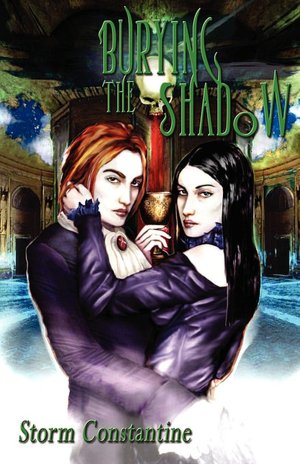 Together they'll make one woman's life hell to save their people.
"A renegade burned out among the stars last night."
Advertisement:

Burying the Shadow is novel by Storm Constantine first published in 1992, written in response to demand for vampire novels without actually giving in and writing a straight vampire novel. The plot follows two protagonists, one an eloim actress named Gimel Metatronim, the other a human woman and soulscaper named Rayojini. For thousands of years the eloim have been living among the humans, bringing them culture and art and philosophy, hiding their true nature. For just as long, the soulscapers have been treating mental and spiritual injuries and illnesses.

But now the eloim are falling victim to an illness called the Fear, which is leading them to commit suicide. Gimel and her brother Beth go seeking a soulscaper to heal their people, but all their attempts with adults fail. They decide then that they need to find a child, which leads them to Rayojini.

Little do any of them know that this matter is bigger than they think.

Burying the Shadow provides examples of the following tropes: