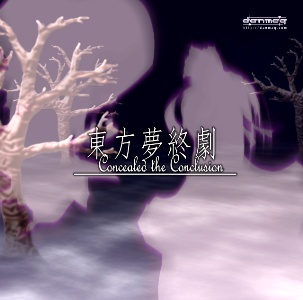 In Gensokyo, a rather weak spring is blooming. The flowers are weak, the youkai are rather calm, and Gensokyo seems to be in a slump. Marisa Kirisame, a scheming magician, is brewing up some new magic. However, unlike her normal magic, this isn't for fighting, it's for viewing flowers. She goes over to Reimu Hakurei, to show her. However, when she shows up at the shrine, nobody is there, and it's locked up, appearing to have been vacant for a period of time. A tragic story of Gensokyo has quickly begun...

Touhou Mutsuigeki ~ Concealed the Conclusion is a fangame to the popular Touhou Project series of shooting games, developed by doujin group danmaq, first for the Touhou Danmakufu engine, then as a standalone game. The game revolves around a point system called 'Hakurei', similar to the Time Orb system in Imperishable Night. Also brought over are the Last Spell and Last Word spell cards, as well as differing conditions for the Stage 6 boss depending on the amount of Hakurei you have.