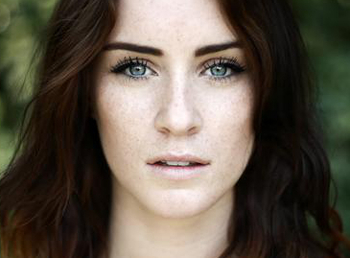 Lucie Jones (b. 20 March 1991 in Cardiff, Wales) is a Welsh singer and actress, best known for working greatly in British theatre.

Jones' first appearance was on The X Factor, where her elimination during the live shows (placing 8th overall) was considered controversial due to Jedward being chosen to continue from their sing-off.

After this, she began working in theatre, with her first major role being Cosette in 2010. For this, she was also featured in the Les Miz special 25th Anniversary concert. Most of her roles have been leading characters, and also those with notably tough songs or scenes, including playing Maureen in the 20th Anniversary production of RENT. Jones has also starred in several television shows and released an EP and several singles.

In international notoriety, Jones represented the United Kingdom in the 2017 Eurovision Song Contest, with the song "Never Give Up On You". The performance scored 111 points, one of the nation's best results for several years, despite the UK being in the process of detaching itself from the European Union at the time.