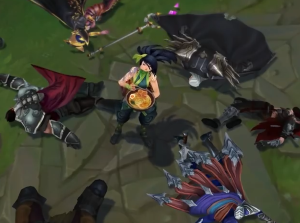 "Too many noobs."
Advertisement:

The world of Runeterra is enormous and its ever-increasing cast eclectic, lending itself to being adventurous, awe-inspiring, touching, scary, heartrending, and naturally, full of lots of funny moments.

As per page guidelines, all spoilers below are unmarked!