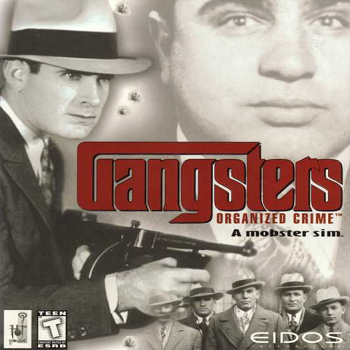 Gangsters is a 1998 PC game published by Eidos Interactive. It is a curious mix of Turn-Based Strategy with Real Time Tactics gameplay, and unsurprisingly involves the creation and management of an organized crime outfit vying for control of a fictional city in The Roaring '20s.
Advertisement:

The player is the head of one of these crime organizations, whose goal is to edge out the competition and get their bosses arrested or killed. This can be achieved in many different ways, all of them illegal, but often involves copious amounts of racketeering, bribery, and midday assassinations.

During the turn-based portion of the game, the player is given a set of elaborate menus detailing everything about his/her organization. This includes a full roster of men, potential recruits, real-estate, weapons, vehicles, and even a list of the city's political figures that could be manipulated. The player can view lots of statistics about each of these, and must eventually use them all to come up with a plan for what each member of the outfit will do during the coming week. Your troops can be sent out to perform all sorts of missions, such as recruiting more men, acquiring new property and setting up illegal activities, running said illegal activities to get money, bribing or assassinating officials, and of course attempting to "hit" members of the opposing crime factions. You need to select the right men and equipment for each job, set routes and schedules, and make sure everything is in order before committing to your plan.

Once this phase is done, the week begins, and all orders are carried out by your numerous "employees" in real time (though orders may still be given, to change your plans on the fly). The city contains not only hundreds of criminals but also thousands of civilians and law-enforcement officials, who will also go about their business as the week proceeds. It can be downright chaotic at times, especially when several factions go to war with each other all over the map (making micromanagement difficult, if not downright impossible). Once the week is over you are returned to the planning stage, to rinse and repeat.

The game was exceptionally complicated for its time, and hardware-intensive to boot. Unfortunately, its execution (particularly the difficulty in staying on top of things during the real-time portion of the game) made it quite difficult to play, and the copious statistics and limited in-game instructions made the whole thing utterly confusing to newcomers. Nonetheless, it was one of the first games to delve so deep into the operations of criminal organizations during the 1920s, and one of the first games to portray such a large-scale "living world" in real time.