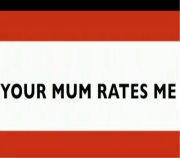 what else do you need to know?
"Where Bandwidth Commits Suicide and Cool Comes to Die"
Advertisement: