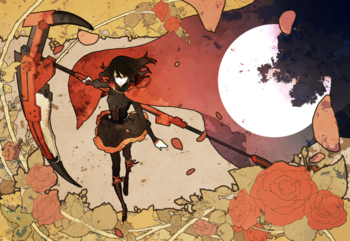 This manga tells of Ruby Rose, a fifteen year old girl who wishes to become a Huntress as an adult. She is accepted into the acclaimed Beacon Academy two years early and is made the leader of a team of Huntresses-in-training consisting of her sister Yang Xiao-Long, a famous heiress named Weiss Schnee, and a quiet Faunus named Blake Belladonna.

Though RWBY: The Official Manga adapts the series' first two volumes rather faithfully, there are notable character and event deviations between the manga and web-series. Most chapters cover more than one episode from the series.

This manga is separate from the 2015 manga (which is simply titled RWBY). It is also a separate piece from the RWBY: Official Manga Anthology.