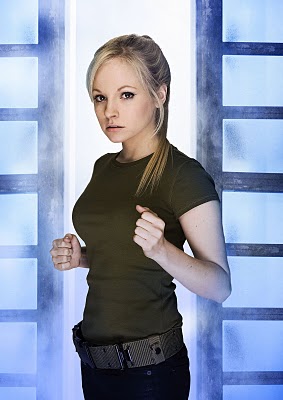 "Hello, Dad."
"At first I decided I wanted to do anything other than act. Then the acting bug got the better of me. I suppose it's in my genes."
Advertisement:

Georgia Elizabeth Moffett was born on 25 December, 1984 in London, England. This British actress is the daughter of Peter Moffett (better known by his stage name, Peter Davison, he played the Fifth Doctor in Doctor Who) and Sandra Dickinson (Trillian in the TV version of The Hitchhiker's Guide to the Galaxy (1981)). She often performs alongside her father and in Doctor Who-related productions such as audio books. She has absolutely no connection to Steven Moffat (note the "a") other than Doctor Who.

Known among fans of The Bill for her recurring role as Abigail Nixon, wayward daughter of DI Sam Nixon, appearing in 25 episodes. Has made some other drama appearances, and often acted alongside her father during the early years of her career (including at one point playing his love interest).

Asked producers to consider her for the role of Rose Tyler in the Doctor Who revival, but they decided she was too young and did not allow her to audition, and the role went to Billie Piper. She did a Big Finish Doctor Who drama before her big appearance in the show proper. She auditioned for a role in "The Unicorn and the Wasp", but the production team had a better idea...

So, in "The Doctor's Daughter", she played Jenny, the Tenth Doctor's "daughter" (Opposite-Sex Clone, to be more precise). She went on to play Cassie in the animated Doctor Who adventure "Dreamland" and has voiced roles in several other Doctor Who audio books.

Was in the flop that was Spooks Code 9 and played Lady Vivian in an episode of Merlin. She then starred in the BBC3 sitcom White Van Man which was cancelled after two series, and acted in her first West End play What the Butler Saw (the role required her to strip on stage, something she described as challenging but liberating. By coincidence her husband starred in this play 16 years previously) but the production was a flop and was cancelled early. In 2012 her father revealed that she had quit acting due to struggling to find roles. However she continued to pursue acting work, since 2012 she has made two TV guest appearances, starred in her own short film, and recorded a Doctor Who audio book.

Has a son, Ty, born in 2002, the result of a short-term relationship when Moffet was 16. The father is unknown. Ty is a child actor who attends a drama school run by Moffett's mother, and has appeared in two productions with his mother (a reality TV show and the Doctor Who unofficial 50th anniversary webcast episode 'The Five-ish Doctors' which his grandfather Peter Davison wrote, directed and starred in, and his mother produced and acted in), as well as a TV commercial. She married David Tennant on December 30th 2011, after giving birth to the couple's daughter Olive ('Ollie') earlier that year. (Tennant proposed on Christmas Day 2010, which was also Moffet's 26th birthday, a triple celebration as she was six months pregnant at the time. Moffett and her son then moved in with Tennant the following week.) Following the marriage Moffett changed her name to Tennant, her husband's stage name, and had Ty's name changed to Tennant also. In 2012 Tennant legally adopted Ty. Ollie made her acting debut at the age of one, playing John Barrowman's daughter in 'The Fiveish Doctors.' Their third child, Wilfred ('Fred'), was born in May 2013 and a fictionalised scene of Moffet giving birth to him is included in 'The Fiveish Doctors' (other scenes show Moffett heavily pregnant with him). It is not known if he was named after Wilfred Mott, the Doctor Who character who was of extreme importance to the Tenth Doctor. See the top of the page for the Cast Incest induced Mind Screw that ensues. In December 2013 Moffett purchased a Toy Cockapoo puppy named Myrtle, which made its TV debut several months later in a TV commercial for Sport Relief.

Tropes that apply to this actress include: