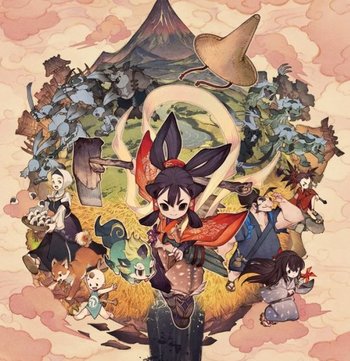 Sakuna: Of Rice and Ruin, a Market-Based Title, with the original being Tensui no Sakuna-hime (天穂のサクナヒメ), meaning "Heavenly Ears of Sakuna-hime", given the eventual Title Drop, is a side-scrolling action-platformer developed by Japanese independent game studio Edelweiss, and published by Marvelous in Japan and Europe and XSEED Games in North America. The game has deep crafting and rice cultivation in a tale about finding one's place in the world. Its scheduled release date was on November 10, 2020 for PC via Steam, and November 20, 2020 for PlayStation 4 and Nintendo Switch.

Spoiled harvest goddess Sakuna finds herself banished from her opulent celestial home to an island overrun with demons. In the untamed wilderness, she must rediscover her birthright as the daughter of a warrior god and harvest goddess by weathering the elements, fighting monsters, and cultivating rice, the source of her power. By her side in this foreboding place is her guardian Tama and a group of outcast humans. Together, these unlikely companions must join hands to tame both the soil and the demons of Hinoe Island.

Sakuna: Of Rice and Ruin provides examples of: