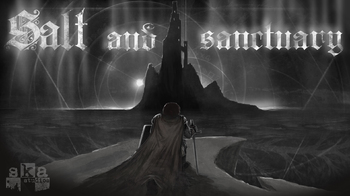 The only Soulslike where dying makes you less salty!
"Envy is such a thing.
A man envies his neighbor, whose wife is very beautiful.
A lord envies a king, who commands nobles.
A king envies a god, to whom all men must bow.
And a god envies... a god envies what a god cannot have."
—The Old Man
Advertisement:

Salt and Sanctuary is a Souls-like RPG made by Ska Studios, the creators of The Dishwasher series and Charlie Murder. The game takes cues from FromSoftware's Dark Souls trilogy, Demon's Souls, and Bloodborne; you have a stamina bar, which depletes as you perform attacks, sanctuaries act as your bonfires, dying has you drop your salt which enemies can pick up to become stronger. It also takes a lot of cues from the Castlevania series — not only is there a lot of platforming involved — you get mobility upgrades that allow you to reach new areas and go through previously unavailable paths in revisited ones.

The world has been at war for centuries. But at last, a tentative means of peace: a political marriage. You are the crew member of a ship, charged with transporting your princess to her suitor. Unfortunately, it all falls to shambles as a freak storm rises and assassins strike down the crew. Death is not the end, however, as you awaken shipwrecked on an uncharted island. In fog-shrouded valleys, where grinning, mossy corpses cling to rusted arms, shambling figures begin to stir. Beneath crumbling, salt-worn structures, labyrinthine passageways lead to unspeakable evil, long forgotten by man. You only have two objectives: find the princess and escape.

A sequel title, Salt and Sacrifice, was released for the PS4 and Playstation 5 in May 2022.