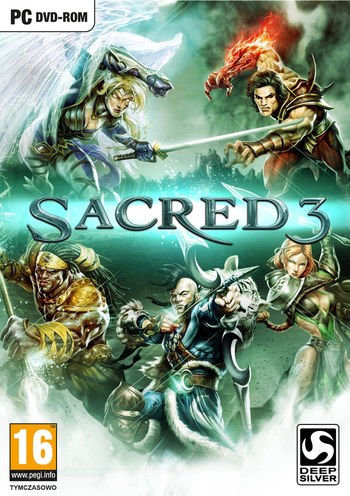 Sacred 3 is a 2014 Hack and Slash game. It serves as a loose Sequel to Sacred, most specifically to its Spin-Off Sacred Citadel, which introduced its plot and story.

In an unspecified, but presumably very big amount of time after the events of Sacred, the Seraphim, guardians of the recovered Heart of Ancaria, have fallen from grace with the land's inhabitants. The foreign warlod Zane, allied with demons from Underworld, has invaded Ancaria to annexionate it to his Ashen Empire, and now intends to open the gates of Hell by using the Heart of Ancaria. In order to stop the menace, a new batch of heroes has appeared, led as always by the Seraphim Claire, eager to recover their place as guardians of light.

Subjected to criticism from day zero due to tone and gameplay changes, which included abandoning the open world system used by Sacred and Sacred 2, this game is the only in the franchise that didn't feature any expansion.

The game and Citadel provide examples of: