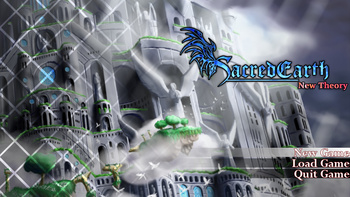 Sacred Earth is a series of RPG Maker games developed by Sacred Star Team, with the canon being rebooted several times before Sacred Earth - Promise became the first commercial release in 2018.
Advertisement:

The snowy city of Garenia is home to people of many races, and the city itself is on a floating continent, Miltiades, that is slowly rediscovering Ether technology due to the fallout of a war. Garenia is currently peaceful due to the effort of its Vanguard mercenaries, but this peace is broken due to reports of a mysterious group of Relic thieves and rumors of a girl falling from the sky. There are also rumors of the Prophets, reincarnations of the Apostles who stopped an ancient war, who are destined to guide civilization once more.

The first canon installment, Promise (VX Ace), is presented from the POV of Priel Aylin, a dragonkin Vanguard whose whimsical personality and talents cause her to chafe with her peers and her sister, Perrine. The Aylin sisters manage to put aside their differences long enough to win a local tournament, only to discover that their rivals are the Relic thieves and that their old friend is working with the villains. The sisters and their childhood friend, Relima, have to work together to stop the thieves from taking another Relic and convince their friend to rejoin them.

Promise has a Steam page

and an itch.io page

The next installment, Sacred Earth - New Theory (VX Ace), started development in 2018, with a short IGMC demo available on itch.io

. This time, Veili and Gunnar are the protagonists, and they must contend with a curse that's causing the entire continent to crumble. When they attempt to approach a mysterious tower, they get teleported inside one of the floors. Now they have to climb the tower while surviving against the executives of Illuminate.

In 2022, Sacred Star Team released a demo for Sacred Earth - Alternative (MZ), which has an IGMC demo on itch.io

. The protagonist, Konoe, is an amnesiac who wakes up in a ruined world. She must reclaim her memories by traveling to several dungeons, but a mysterious hooded figure mocks her with cryptic words. Worse yet, she finds that reclaiming her memories is going to be physically and emotionally painful due to the bosses of each dungeon.