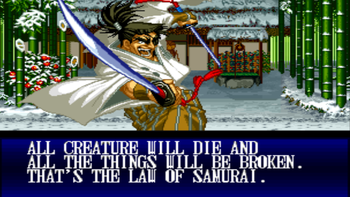 FALL!!
Samurai Spirits & Samurai Spirits 0, Intro (rough translation)
A Samurai fears not death,
struggles to triumph over evil,
and lives for one purpose:

TO DESTROY ALL ENEMIES.
Samurai Shodown, Intro (1993)
The code of the Samurai is "Death before dishonor".
I have realized the way of Asura.
In these troubled times...
I have chosen to become RASETSU!

DESTINED TO KILL ALL WHO COME BEFORE ME!
Samurai Shodown V, Xbox Version Intro
Advertisement:
The way of the Samurai is to know death.
The way of Shura is to know victory.
I am the ultimate fighter, and all those who stand in my way shall...