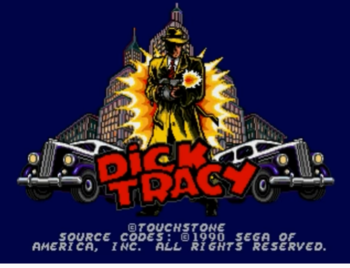 A 1990 licenced action game by Sega, loosely based on the namesake 1990 movie.

You're the titular Dick Tracy, on a case to rid the city of the notorious gang boss Big Boy Caprice. The game is a sidescroller action title where you take control of Tracy as he searches for clues and battles numerous gangsters and bosses.

The gameplay consists of Tracy walking left-to-right along the foreground of the screen, but the twist is that occasionally enemies will try to attack Tracy from the background, as they shoot "into" the screen. Tracy can pull out his Tommy Gun to shoot the background enemies. The boss battles in the game have this set up. Players have to quickly react to both the foreground and background action to succeed in the game. The game will ramp up the challenge with swarming enemies from both planes, forcing the player to do quick reflexes to deal with the action. Don't get too caught up in one enemy, because it only takes a second for another enemy to land a sneak attack on you.

Along the way, Tracy will encounter and fight iconic villains in thrilling boss battles, like Pruneface, Flattop, and Lips Manlis. The game has very detailed and colorful graphics, and a banging swing jazz soundtrack.