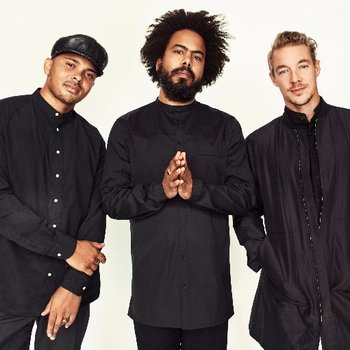 Major Lazer is an Electronic Dance Music production project. The main purpose was to mix Reggae and Electronic Music together into a seamless package that would fill dance clubs all around the world. Originally, it was a duo consisting of Diplo and Switch, who were introduced to each other while working with M.I.A.. Together, they recorded their 2009 debut album Guns Don't Kill People... Lazers Do in Kingston, Jamaica. It reached moderate commercial success, charting on the Billboard 200 and making them a true name in the ever-growing EDM scene. Unfortunately, Switch left in 2011, with Diplo citing Creative Differences, and he was replaced by Walshy Fire and Jillionaire, turning the project into a trio. Jillionaire left the group in 2019 and his replacement is Ape Drums.

In 2013, they released their second album Free the Universe. It proved to be a bigger success than their first, hitting the Top 40 and solidifying themselves as stars. In 2015, their they dropped their third album Peace Is The Mission, which made it up to #12. More impressively, it produced the absolutely massive crossover hit "Lean On", their collaboration with DJ Snake featuring MØ, which placed in the Top 5 in almost every country in the world including the United States, and became (for a while) the most streamed song on Spotify of all time.

They are currently working on their fourth album, Music is the Weapon. The first single produced was "Cold Water", featuring Justin Bieber and MØ, which also became a smash hit (though largely due to Bieber's presence). It was later put on their Major Lazer Essentials album as Music is the Weapon has been delayed. What once started as a pet project has grown into one of the biggest EDM groups on the market.

They're popular enough to produce their own television series. For tropes related to the show, see that page.