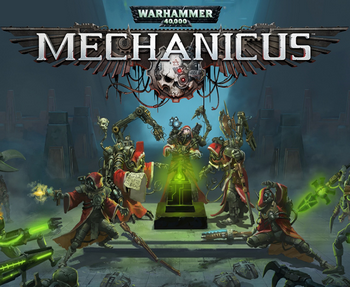 Even in death, I serve the Omnissiah.
From the moment I understood the weakness of my flesh, it disgusted me. I craved the strength and certainty of steel. I aspired to the purity of the blessed machine.
Your kind cling to your flesh as if it will not decay and fail you. One day the crude biomass you call a temple will wither and you will beg my kind to save you.
But I am already saved. For the Machine is Immortal.
Advertisement:

Warhammer 40,000: Mechanicus is a Turn-Based Tactics game developed by Bulwark Studios and published by Kasedo Games. The game was written by Black Library author Ben Counter, and was released on PC November 15th 2018, and can be purchased on Steam

Set in the Warhammer 40,000 universe, the player commands the crew of the Ark Mechanicus Starship Caestus Metalican, which has uncovered the Necron Tomb World of Silva Tenebris. Led by Magos Dominus Faustinius and his (somewhat quirky) retinue of Tech-Priests, the player is tasked with leading the Adeptus Mechanicus' effort to explore the tomb world. Making matters more pressing is the fact that the Necrons are awakening, and the Great Rift cuts any hope of further reinforcement. While the Skitarii hold perimeter against the ever increasing Necron forces, it's up to a small squad of Faustinius' Tech-Priests to perform surgical missions to secure the Mechanicus' victory before the Necron forces fully awaken. Adding yet more complication, Faustinius' advisors all have their own agendas and goals, and it's up to the player to decide whose advice to follow.

The gameplay of Mechanicus consists of missions taking place inside a series of dungeon rooms. Each room offers the player a combat encounter (played in a system not unlike that of XCOM: Enemy Unknown) or decisions the player must make about discoveries and difficulties encountered by the party. Each mission is given by one of Faustinius' colorful advisors:

An expansion, Heretek, released in late July, 2019. In addition to new maps and new units for you to command, the expansion adds a new story involving a Xenarite (heretical Tech Priests obsessed with hording and studying Xenos technology) uprising on your own ship.

Agrohlek: ''I wake with the turning of aeons. Stars yet burn. Life yet blossoms. Is it truly time?
Even in death, I serve the Omnissiah.