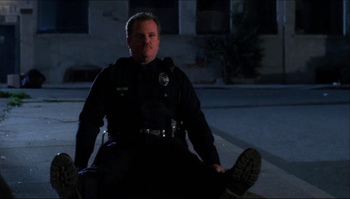 In the hotel, Angel starts to feel the weight of his self-imposed loneliness and stands at the spot the team used to gather before and, in a flash of anger, shoves a pile of papers off the desk. He then goes to get some information regarding Wolfram & Hart out of Merl, who is leaving town, and is reminded of the fact he fired his friends and hasn't thought to check on them. A friend of Virginia brings her daughter to the soon-to-be-renamed Angel Investigations, asking them to remove the eye that grew out of the back of her head after she was attacked by an unseen assailant. Wesley assures the mother that they will find a way to get rid of the eye.

At a teen shelter, two teens show up after curfew in search of safety, and their fear convinces shelter administrator Anne to make an exception to the rules. Kenny explains that he and Len were unfairly attacked by a policeman, which has been happening to other street kids as well. Anne takes the problem to Gunn at Angel Investigations. He accompanies her back to the shelter and questions the kids about the incidents with the police. Angel, who has surreptitiously trailed Gunn, is attacked by a policeman while standing outside. Angel fights back, but the officer rises every time he's knocked down, until the vampire kicks the cop's head completely off and even then, the head keeps talking for a moment. Deciding to investigate this himself, Angel goes to Kate to look up the dead cop's badge, she finds that he's been dead for six months. More sleuthing reveals that someone is putting dead cops back on the streets as zombies.

Cordelia rants about Gunn's dangerous decision to call in several members of his old crew to deal with the police by filming the police assaulting them, but she and Wesley resolve to go back him up anyway. Wesley comes upon Gunn and his friends secretly filming their exchange with a police officer, to demonstrate that cops are reacting violently without just cause. Wesley tries to save Gunn, but the cop turns and shoots Wesley. A struggle takes place and George shoots the cop. The three men move Wesley to safety as the cop sits up, seemingly unaffected by the bullets. Gunn and friends get Wesley into an ambulance, but as they're driving away, several police cars get in the way. When the driver is shot, Gunn is forced to drive the ambulance. He eventually stops at the shelter and carries Wesley inside with the EMT, who warns that Wesley needs to get to a hospital fast. At the shelter, Cordelia sees a teen wearing some of her clothes and realizes Angel gave away the clothing she had left at the Hyperion. Cordelia helps Anne supervise barricading the shelter with everything they can find as an army of dead cops gather outside. The zombie cops force their way inside the shelter through the windows and doors, hurting several teens in the process.

Angel visits the precinct where the zombie cops were from. The police captain confesses that he has been using supernatural means to return good cops to the streets and protect previously violence-ridden neighborhoods. Angel finds an Idol of Granath and smashes it, returning all the zombie cops to their former dead, decaying states.

Kate and Angel discuss the ambiguous ramifications of their victory for the neighborhood, and Kate confides in Angel that the job is making her crazy. After hearing of Wesley's injuries, Angel attempts to visit him in the hospital, only to run afoul of Cordelia, who coldly tells him that Wesley doesn't need him and, since he walked out on them in the first place, he should just stay away from them. After briefly looking into Wesley's room, Angel obliges.