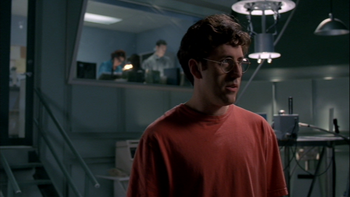 "I looked into this guy and I saw...he has no future after ten o'clock tomorrow night. And neither does anybody else."
Advertisement:

Wesley and Cordelia, cleaning up their new office, discuss their future as investigators without Angel and most likely without enough clients to keep their business running for long. The two decide to keep the name 'Angel Investigations' as Gunn walks in fresh from posting flyers. Unfortunately, the three then find out the phone line is still disconnected which is quickly followed with the power going out.

At the hotel, Angel awakes to the sounds of the Host singing "The Star Spangled Banner" down in the lobby. He tells Angel about a "normal-looking" guy who came to sing at Caritas and when reading the man's aura, the he was literally knocked out, having seen that the world would be ending the following night and this man would have something to do with it. Unfortunately, the man left the bar without speaking to the Host so they have no idea who he is, where he is or how he'll destroy the world. The Host came to Angel for help because Angel is a champion. Angel initially refuses to help, but eventually goes along.

The man singing at the bar, a physicist named Gene Rainy, is working on a device to stop time. His girlfriend, Denise, visits him and they talk of their plans for their first anniversary. With no other leads, Angel and the Host check out karaoke bars across LA to find Gene and eventually find one that Gene frequently visits and learn he's a student at UCLA. After an unsuccessful attempt to test his formula, Gene leaves his work area and two Lubber demons emerge from the shadows to alter the formula Gene has been working on.

Wesley, Gunn and Cordelia mope about their job troubles, but Virginia stops by with food, champagne, and a case they can take to earn a lot of money—a wealthy family is being menaced by a demon, who has killed the eldest son.

Gene successfully tests his new theory and equipment, while Angel and the Host look at yearbooks at the college library for the name of their depressed mystery man. Denise confesses to her friend that she has to break up with Gene because things aren't working out. However, as its their anniversary that night, she still plans to go through with the romantic evening which includes having sex with Gene. Little does Denise realize that Gene has overheard everything and he returns to the lab, dejected. While getting directions to Gene and the physics lab, Angel is attacked by the Lubber demons. The Host identifies them as a species of demon that are awaiting a promised one who will end the world. Angel reasons that the promised one is Gene, and that he's got the demons protecting him.

When Angel finally gets to the physics lab, he discovers that Gene is gone and so is his equipment. It turns out that Gene took the equipment home because he has plans to freeze time during a moment of love between him and Denise. As they race to Gene's apartment, the Host asks Angel if a part of him wouldn't mind if the world ended that night. Angel's lack of response confirms this, and the Host tries to get Angel to talk about his recent steps into darkness and how he's gone from helping the innocent to punishing the guilty. After some prodding Angel eventually vents his feelings about his supposed redemption, Wolfram & Hart's attempts to turn him to the dark side and the resurrection and siring of Darla and the fact that despite everything people expect him to lighten up. He pledges to kill Darla, then destroy Wolfram & Hart, and he fired his friends because he feels they won't be able to handle it which he says is a good thing.

Meanwhile, Gunn kills the demon that he and the others were hired to protect a rich family from. In a Sherlock Holmes fashion, Wesley uses deductive reasoning to reveal the real truth behind the murder, that one of the family hired the demon to kill the eldest son and heir and thereby gain control of the family money.

Angel and the Host fight several Lubber demons who are trying to prevent them from stopping Gene. They then rush to stop Gene before it was too late. Gene freezes Denise and himself at his moment of greatest passion, but thanks to the altered calculations the bubble encasing Gene and Denise expands and threatens to freeze the whole world. Thankfully Angel is able to defeat the remaining Lubber demons and turn off the machine and undo the whole process, and Denise breaks up with Gene afterwards. When Angel and the Host talk to Gene later, Gene confesses he did not know the overall effects of his actions; he just didn't want to lose his love. Angel and the Host convince Gene that things need to move on, and while sometimes things do not work out that's part of life. Gene goes to get some drinks, and the Host commends Angel on connecting with a human for the first time in a while. Angel can relate, given they have both had disasters in the romance area and nearly destroyed the world and starts to feel guilty about firing his friends and leaving them with nothing.

At their new office, Wesley, Cordelia and Gunn party in celebration of their success with several friends until a man shows up in need of their services. The three immediately offer to help, and he asks which on the three is the Angel of Angel Investigations. Wesley tells him it was just a name.