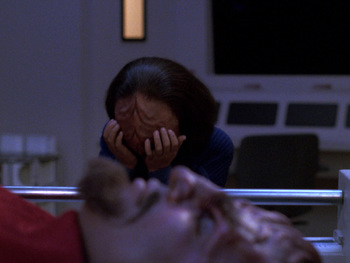 Worf accompanies La Forge to Cargo Bay 3 to investigate some anomalous readings, but Worf finds himself sidetracked by a loss against Troi in a game of poker. While he isn't paying attention, a container in the cargo bay leaks, causing another heavy container sitting on it to fall on top of Worf. Worf is immediately sent to sickbay, but the news is not good—Worf sustained a serious injury to his spinal cord, rendering him paralyzed.

Dr. Toby Russell, a doctor from the Adelman Neurological Institute, arrives to help Crusher find a way to treat Worf. Unfortunately, Worf's prognosis is grim; his paralysis appears to be permanent. In cases where a Klingon is rendered disabled such that they may not fight any longer, it is tradition for the invalid Klingon to commit Hegh'bat, ritual suicide. So it is that when Riker visits Worf in sickbay, the injured Klingon requests Riker help him commit Hegh'bat. Riker confides in Picard how troubling such a request is, but Picard explains that for Worf, his life had ended the moment he was injured - that getting him to accept life with a disability would require getting him to utterly abandon his Klingon identity.

Russell proposes an experimental treatment that would fully cure Worf: using a genetronic replicator to construct a new spinal column. There is one caveat, however: the procedure has only been performed on holographic test patients up to this point (with a 37% success rate), but never on a live patient. Worf would be the first one to undergo this radical new procedure, and Crusher believes it to be an unnecessary risk. Crusher, instead, suggests a more traditional treatment for Worf, using cybernetic implants to bypass his damaged spinal cord and stimulate his leg muscles. That treatment, however, would not return full mobility to Worf, and he emphatically refuses to undertake it. Against Crusher's warnings, Russell pitches the genetronic replicator to him. Crusher is cross with Russell for playing to Worf's desperation to try and push her experimental procedure on him, especially considering Russell had previously requested permission from Starfleet three times to test it on live patients, being denied each time.

Worf reluctantly sees his son Alexander for a few moments before he sends him away, ashamed of his weakness and disability. Meanwhile, colonists who had run afoul of a mine left over from the Cardassian war come aboard the Enterprise for treatment. Dr. Russell assists the Enterprise medical staff with the casualties, but Crusher learns that Russell has performed another experimental and unapproved treatment on one of them using a drug called borathium, which resulted in the patient's death. Enraged, Crusher relieves Russell of duty and forbids her from practicing medicine while on the Enterprise.

Picard visits Crusher's office to discuss Russell. Crusher is uncomfortable with the idea of an unscrupulous doctor who jeopardizes lives in unethical experiments performing medicine, but Picard believes Russell may be Worf's best chance at living; it may be possible to live a full life with his paralysis by human standards, but Worf's Klingon pride would not permit him to suffer such a disability.

Meanwhile, Riker is completely opposed to helping Worf kill himself, seeing it as an affront to everyone who has perished in the line of duty, up to and including Tasha Yar. Finally, he tells Worf that he will help him die, but only under one condition—Klingon tradition dictates that the one who ultimately kills a Klingon in Hegh'bat must be a living relative. In Worf's case, that means there is only one person who is permitted to kill him: his son, Alexander. Unwilling to place so great a burden on his son, Worf decides to undergo Russell's procedure.

Before going into surgery, Worf asks a favor of Troi: should he not survive, he wants her to raise Alexander. With that, the procedure begins, with Russell and Crusher surgically removing Worf's spinal column and using the genetronic replicator to construct a new one. The procedure hits a snag when the primary scanner has difficulties recording Worf's spine, but Russell manages to manually scan what the primary scanner cannot. After the new spinal column is replicated, they place it in Worf's body. The procedure seems to have worked until Worf's vitals suddenly flatline.

Crusher delivers the news to Alexander: his father is dead. Alexander demands to see Worf... but when he enters the operating room, he discovers, to everyone's relief, that Worf's vitals have stabilized! Klingons have several redundant organs, including secondary synaptic functions that kicked in after the new spinal column was put into place. Russell is pleased with the outcome, believing that the ends justify the means, but Crusher cannot abide Russell's unscrupulous medical practices.

With the procedure being a complete success, Worf begins to undergo physical therapy, with Alexander's help. In time, Worf will regain full mobility and return to his duties.