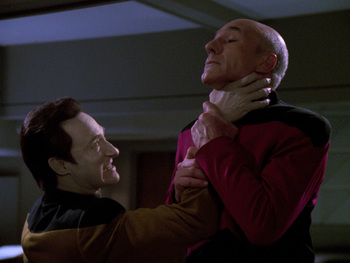 "If this is a consular ship, where is the ambassador?" Whoops, wrong franchise.
Advertisement:

The Enterprise has been drawn to an uninhabited moon around the planet Mab-Bu VI by a weak distress signal. Data identifies it as an old Starfleet signal unused for nearly two centuries. Some quick checking confirms that it matches the Essex, a Daedalus-class ship commanded by Captain Bryce Shumar that went missing during that time period. Unsurprisingly, sensors read negative for life signs, and the hostile conditions on the surface discourage any further investigation. That is, until Troi reports that, somehow, something is alive down there.

There is too much interference for transporters, so Riker, Data, and Troi take a shuttle down to the moon. The Screen Shake proves too much for the shuttle's engines, forcing them to crash-land. The rocky, storm-ravaged surface lends little credence to the thought of finding human survivors, but Troi is certain something is there. Something from within a strange storm front that is rapidly approaching their position...

O'Brien works his engineer magic to beam down to the surface with some pattern enhancers, which will allow all four of them to beam back up, but just before they can finish setting the enhancers up, a shock knocks the four of them to the ground. Some sort of energy enters their bodies, except for Riker, who manages to pull himself up and activate the last enhancer.

Apart from a broken arm for Riker, the away team's injuries were minimal. However, some of them are displaying odd behavior. Troi tells Picard that she felt a presence summoning her to the moon's southern polar region. Data is also uncharacteristically insistent on searching that area and quietly sets a course even after being refused by Riker. This doesn't go unnoticed for long, which prompts Data, Troi, and O'Brien to attempt to take over the bridge by force.

This fails when Riker manages to initiate a command lockdown, so the three make a break for it. They fight their way to Ten-Forward, where they barricade themselves along with several hostages, including Worf and Keiko. They use this as leverage to get Picard to change the ship's orbit towards the moon's south pole.

Through an analysis of the transporter logs, Dr. Crusher determines that the rogue crew have been possessed by some sort of anionic energy, and that Riker may have been immune because of the pain from his fractured arm. La Forge and Ro therefore start working on a plan to drill into Ten-Forward from above with a plasma emitter that will deliver a painful but non-lethal shock that should drive the alien energy out of their hosts.

Picard negotiates for the release of several injured hostages by giving himself up in return. When he meets them in person, the possessors introduce themselves as officers from the Essex: Captain Shumar, Commander Mullen, and Lieutenant Kelly. They claim to have been trapped, disembodied, on the moon for two torturous centuries. Their request is for the Enterprise to retrieve their bodily remains and return them to Earth.

Picard doesn't believe them, not that it matters, since both sides are well past the point of establishing any sort of trust. By now, La Forge and Ro are ready to put their rescue plan into action. They line up the plasma emitter, but Data moves at the last second, barely missing the burst. He Neck Lifts Picard until the captain orders the crew to stand down.

Having reached the moon's south pole, sensors find no sign of the Essex or her crew's remains. The abductors each take a hostage—Picard, Worf, and Keiko—and arrange safe passage to a cargo bay. "Captain Shumar" reveals that they are indeed not human, but aliens who were deliberately imprisoned on the moon as a form of criminal punishment. They tried to hijack the Essex two centuries ago, and having failed that, now plan the same aboard the Enterprise. They use the cargo bay transporter to bring up hundreds more of their fellow disembodied prisoners.

However, the bridge crew is prepared for them. They trap the new arrivals on the pad with a neutrino field, and Picard threatens to eject everyone into space if the three leaders do not surrender. Worf and Keiko assent, making it clear that they are ready to give their lives to save the ship. Realizing they no longer have control of the situation, the aliens release their hold on their victims, and they are all returned to their exile on the moon.

Dr. Crusher confirms that the three are healthy and free of the aliens' influence, and the episode closes with a round of apologies—gladly accepted, of course—between all those involved.