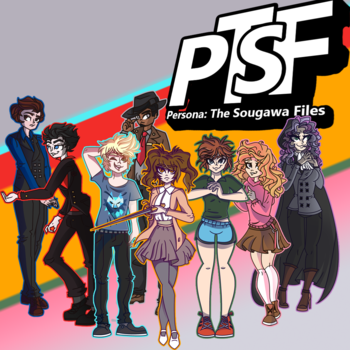 To freedom.note From left to right: Arata Kobayashi, Kazuki Nakajima, Hikaru Hayashi, Ryouichi Fukui, Rina Oshiro, Izumi Akiyama, Wilma Hanley, Tamiko Maeda.
Will anybody like me for who I am?
— Rina Oshiro
Advertisement:

Persona: The Sougawa Files is a Persona fanfiction written by Arsene_Phantom.

Rina Oshiro, the daughter of a wealthy family, moves to the big city of Sougawa to start a new life while living with her sister. While things seem like they're looking up, all is not well in the city, as a strange plague around the city is leaving people in happy, lackadaisical stupors. After a close call with her Shadow, Rina acquires the power of the Wild Card and forms a team called the Freedom Fighters, bent on saving those afflicted with the Shadow disease and defeating the machinations of crime lord Nobuyuki Itou, the old man who controls the Shadow Syndicate and seems to rule Sougawa.

The fanfiction was first published on June 3, 2018 (with Arsene beginning work in April of the same year) and completed on January 26, 2020. It can be read on Archive Of Our Own here

Arsene published the first chapter of a sequel, Persona: The Okabe Files, on May 30, 2020.