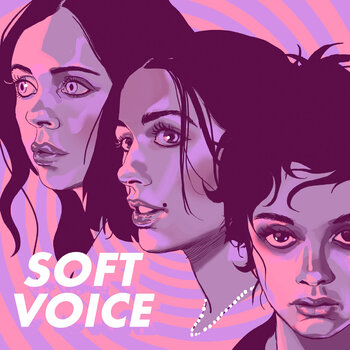 is a dark comedy/drama podcast produced by the podcast company QCODE. Created, written and directed by James Bloor, it stars Naomi Scott, Olivia Cooke and Bel Powley. The episodes were released in 2021.
Advertisement:

Lydia (Scott) is living a perfect life. A very successful real-estate agent, she is also involved in charities, a marathon runner, learns Italian, plays the oboe and regularly visits her grandmother. However, all of this success is thanks to Soft Voice (Powley), a voice she has been hearing in her head since she was a child and which has governed every move and decision she's made, right down to her choice of boyfriend and what yogurt she eats during the day. Lydia's life is upended one day when Soft Voice suddenly goes completely silent. After she is unable to continue doing her work or do her hobbies, things change again when Soft Voice is replaced by a new voice, Dark Voice (Cooke), who instead starts getting Lydia to follow her every own impulse, consequences be damned, leading to some even more unexpected twists and turns of her life.