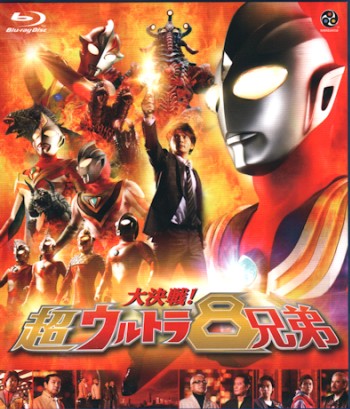 I will protect the world.
Advertisement:

Superior Ultraman 8 Brothers is a tokusatsu film, part of Tsuburaya Productions' Ultra Series, released in 2008. It is the first and so far only feature film directed by Takeshi Yagi, a long-time collaborator of the franchise who has since retired from Tsuburaya Productions, superhero, and kaiju films as of January 2008.

As children, Daigo, Asuka and Gamu were inspired by the television series known as Ultraman to follow their dreams. Daigo aspired to become an astronaut, Asuka to become a baseball player, and Gamu to become a scientist, and design a spacecraft.

30 years later, the three of them live out ordinary lives, their dreams all but abandoned. One day, after being late for work and passing by Hayata's bike shop, Moroboshi's restaurant, Goh's auto shop, and Hokuto's bakery, Daigo (and everyone at work) sees a mirage of a destroyed city in the sky.

Meanwhile, in another universe, a mysterious girl in red shoes, whom Daigo Asuka and Gamu had once met, tells Mirai Hibino that he is needed to awaken a group of heroes in a different universe.