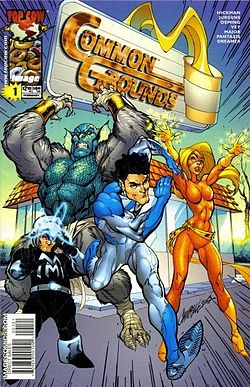 Common Grounds is a six-issue comic book limited series created by writer Troy Hickman note adapted from his Small Press comic Holey Crullers and published by Top Cow Productions in 2004. The series examined the life of superheroes and villains in and around a chain of coffee shops called Common Grounds, all of which which serve as a neutral-ground between superpowered heroes and villains. Because of the lack of violence on their premises, these restaurants allow heroes and villains to speak to one another in amicable situations, and provided insights into their histories and personal lives as they are featured in normal, everyday situations while still in character as a hero or villain.