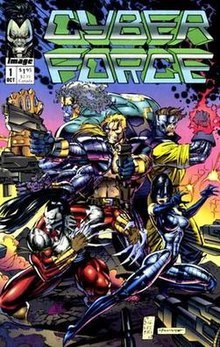 One of the publication lines of Image Comics, created by Marc Silvestri and first published in 1992.
Advertisement:

The comic focused on the titular Cyberforce, a team of cybernetically enhanced mutants who sought to oppose the Mega-Corp Cyberdata, who had kidnapped them and illegally experimented upon them to turn them into Super Soldiers.

Considered one of the lesser successes of the first wave of Image Comics titles, but was the first title from Top Cow Productions and its superhero universe which would later include Witchblade and The Darkness. Under the Top Cow label, it has seen a handful of short-lived revivals titled Stryke Force, named for team leader Morgan Stryker.