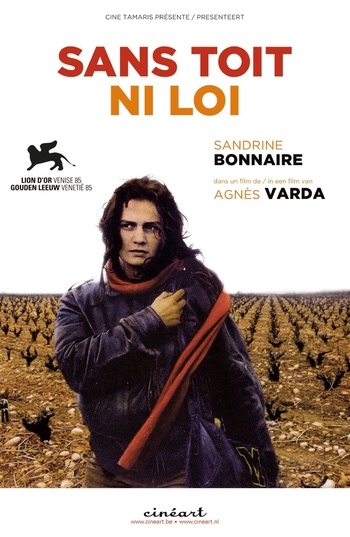 Vagabond, also known as Sans toit ni loi ("Without roof or law"), is a 1985 drama by Agnès Varda. It contains elements of what would become a classic style for Varda, particularly the idea of wandering. The girl of the film, Mona Bergeron (Sandrine Bonnaire), wanders through the wine country. As an earlier example of this motif in Varda's films, it is one of the films cited when describing Varda's overall method in filmmaking as being a journey through the film creation, with lots of wandering tangents explored to truly discover what film she is making as she is making it.

The film is an exploration of rural lifestyles in the wine country, with Mona encountering some farmers and other vagabonds. At one point she meets a young hippy girl and explains that she had lived a lucrative life with a good office job in Paris but was unfulfilled and took to walking. The girl romanticizes the vagabond life and is this point cracks appear in Mona's life; she still does not seem happy, and becomes more depressed as well as physically ailing until collapsing in the snow.

It has been released by Criterion twice, once by itself and once in a collection of 4 Varda films.