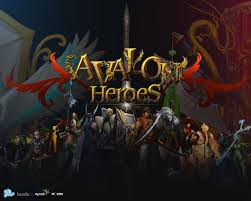 Avalon Heroes is an online game crossing the Action-RPG and RTS genres, much in the same manner as games like League of Legends and Defense of the Ancients. While bearing many similarities to the aforementioned games, Avalon Heroes still manages to have its own style, featuring anime-style characters who seem to all run on Rule of Cool.
Advertisement:

The game features two different factions, the first being Aeonia, a typical swords and sorcery sort of group based quite a bit on traditional European fantasy. The second faction is Oriens, which is based more on Oriental fantasy. Players create a 'kin', a sort of heroes guild that allies itself with one faction or the other, using the heroes specific to that faction, though they can always switch to the other side in between games. Each game a player picks one hero from the ones available to your kin.

Individual games range from Battle mode, where two teams fight to destroy the other's base; Adventure Mode, a cooperative mode where players from both factions band together to take down a computer-controlled dungeon and boss; and Scenario Mode, a single-player adventure that tells the story of the world, allowing one to also unlock new heroes.

Korean game that recently was given an English/European release. It's a free-to-play, pay-for-perks game.