Series / Where Your Eyes Linger 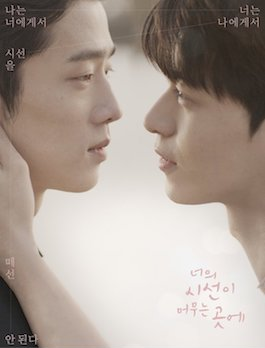 It was directed by Hwang Da Seul.

18-year-old high-school student Han Tae Joo (Han Gi Chan) is the sole heir of a powerful conglomerate. His closest friend of fifteen years is another student, Kang Gook (Jang Eui Soo), who has been hired by Tae Joo's father to also act as his unofficial bodyguard.

When Tae Joo encourages Gook to go on a date, the two are confronted with the realization their feelings go beyond friendship.

Where Your Eyes Linger contains examples of the following tropes: