Visual Novel / Ever After Academy 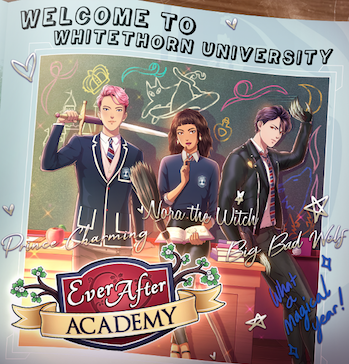 Ever After Academy is a Romance Game Visual Novel by Voltage Entertainment USA, released through their Lovestruck app for iOS and Android devices. It debuted in June 2020.

The story takes place in seaside Whitethorn University in Connecticut. The male protagonist is a recent law school dropout who is returning to his hometown and reuniting with his younger sister, the female protagonist, a free-spirited young woman who loves fairy tales.

One night, their lives are changed forever when they find a hidden door to a secret, magical library, where fairy tale characters spring to life from their books. The protagonists help their new friends craft undercover identities as fellow students of Whitethorn and fit into the new, non-magical world in which they've found themselves. Together, they unravel magical mysteries while juggling school work and social events.