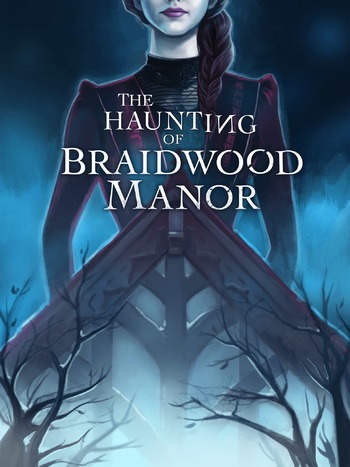 The Haunting of Braidwood Manor is one of several stories from the game collection Choices: Stories You Play, developed by Pixelberry. The game consists of one book divided into six chapters. It's notable for being Choices' first foray into the horror genre.

In this game, you play as Hannah, a college student who's been haunted for some time by the death of her brother Jonathan in a car crash. She's been having numerous nightmares in which he comes back from the dead and stalks her, and she's convinced that these are more than just bad dreams—that Jonathan is not at rest.

In order to find a way to get Jonathan's ghost at peace, Hannah decides to spend some time at the legendary Braidwood Manor, which is infamous for being the site of a mass-murder over a century earlier, in the hopes of getting some answers. Once she arrives there, however, she discovers that the house has some rather dark secrets...

The Haunting of Braidwood Manor has examples of the following tropes: