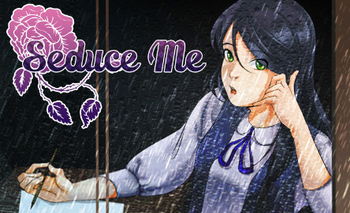 “It seemed like the start of something new. Something that would change.”
Advertisement:

, released for the PC in February 2015. After funding a successful Kickstarter, the game was released for free online and can be found here

. It was also greenlit for a Steam release.

18 year old Mika Anderson is the granddaughter of the CEO of the famous toy company, Anderson's Toys. After her grandfather passes away, she inherits his mansion, which her father decides to move her into right away. Upon arrival, she encounters five unconscious men — actually incubi — who have broken into her house to seek shelter from a group of devils. As they have nowhere else to go, Mika allows the incubi to stay with her in the mansion and in exchange they do the housework while preparing to take the misfits on again so they can leave.

. In addition to the game, the franchise includes an original music CD, up to five playable epilogues, and a drama CD, which is a non-interactive What If? story that shows the reader what life would have been like if the player character didn't end up with any of the boys after Malix's defeat and they still ended up staying with her in the mansion.

In late 2015, Seraphim Entertainment announced that they were going into production of a sequel— Seduce Me 2: The Demon War, which details the incubi coming back to their world and the eponymous war, a rebellion against the Demon Lord, happening during their return. The sequel game released in 2016, and is the last installment in the visual novel series.