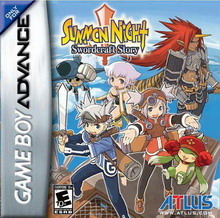 Summon Night: Swordcraft Story is an Action RPG developed by Flight-Plan for the Game Boy Advance as a spin-off to the Summon Night series. The Japanese version was released in 2003, with the North American release following quite a while later in 2006.
Advertisement:

The story takes place mainly in Wystern, the "City of Swords" where many people work as blacksmiths and crafting guilds are common, led by the Craftlords. The player takes the role of either Cleru or Pratty, an apprentice craftknight as well as the only child of the infamous "Craftlord of Iron", Shintetsu.

Three years ago, Shintetsu sacrificed himself to protect the city from an unknown danger. In order to find a replacement for the empty seat, the remaining Craftlords have arranged a tournament for craftknights; the winner shall become the new Craftlord of Iron. Cleru/Pratty joins the tournament, in hope to become like his/her father, and to become a Craftlord.

Exploration in the game is similar to Pokemon in that you can walk and hold B to run and also surf on water, but you also have a hammer to whack things and reveal hidden locations. When a random battle takes place, the game switches to a 2D screen where you use your chosen weapon while partnering up with your Guardian Beast.

What's special about this game is the ability to forge your own weapons. You can choose one of five weapon types: Sword, Axe, Spear, Knuckles and Drills.