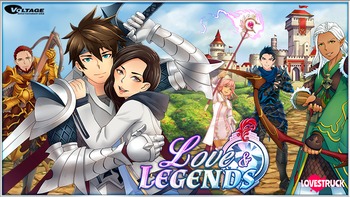 Love & Legends is a Visual Novel Romance Game for iOS and Android by Voltage Entertainment USA, released via the Lovestruck portal app. It is the first romance game title original to Lovestruck rather than being previously published as a standalone app.

The protagonist is a young, rather geeky millennial living in Chicago. One day, en route to a fantasy movie her friend Sophie recommended, she finds herself caught in a lightning storm, and the next thing she knows, she's stuck in a medieval fantasy world. To make things worse, she just so happens to look exactly like this world's Big Bad, The Witch Queen — something she discovers pretty quickly when the first reaction she gets is to be arrested and taken to a castle dungeon to be interrogated.

Luckily, her captors are good people, and Lord Wolfson decides quickly that the dungeon is not the right place for her — but they can't just leave her alone, either. And so the heroine, and player, is asked to choose between five potential Love Interests: rigid and cool knight August Falke, flirty and seemingly careless elf prince Iseul Idreis, quiet and mysterious demon Saerys, hard-working but playful magician Altea Bellerose, or kind but fair lord Reiner Wolfson himself. Later, two new love interests were added, contained in their own routes disconnected from the common route: bad guys Alain Richter and Helena Klein.