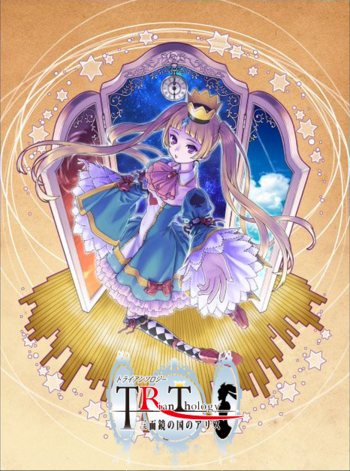 The Witch of Gutting welcomes you to her world. note This cover art will take on a whole new meaning once you find out.
"...I do understand that scraping out their innards is not allowed.
However, boredom is the poison I dread the most - and my fate is to keep running from it."
— Alice
Advertisement:

TRianThology ~Sanmenkyō no Kuni no Alice~ (meaning "TRianThology ~Alice in the Land of the Three-Sided Mirror~") is a kinetic visual novel that follows the journey of a witch named Alice. The title capitalizes the initial letters of its three scenario writers: Romeo Tanaka, '''R'''yuukishi07, Yuuto Tonokawa. It is commonly abbreviated as TRT.

One day, Alice, known as the Witch of Gutting, is overcome with boredom and threatens her friend Usagi with a bodily remodeling for her own amusement. Seeking to distract Alice, Usagi promptly presents three world fragments - crystal shards containing worlds and stories which Alice has not experienced before.

Going against Alice's penchant for gutting worlds by experiencing the most interesting parts first and discarding the rest, Usagi sets a rule for her: She is to visit the three worlds one at a time, letting them unfold, and experience them gradually, along with their savory details.

Thus, Alice sets off on her journey to the three worlds:

Unlike the original sound novel series When They Cry which 07th Expansion is famous for, TRT is officially labeled as a visual novel. It is an experimental work in many aspects, especially as far as its story structure, sound track and visual elements are concerned. It does seem to take place in the When They Cry verse, however, with Witches and Fragments as well as references to characters like the Witch Beatrice.

In 2016, prior to TRT's release, a manga titled Country Girl was released on the Seiga platform

of Nico Nico Douga, and serves as an introduction to its eponymous world (which is one of the three worlds Usagi presents to Alice) in the visual novel. It was illustrated by Tatsuhiko and distributed by Square Enix. A scanlation of its first five chapters exists and was released by Crashed Tea Party. Official translations of both the visual novel and the manga have yet to be announced.

Warning: Since TRianThology has major twisted plot points topped copiously with Mind Screw, it is advised to read the visual novel prior to perusing the trope list.

Congratulations! It's a Happy End!