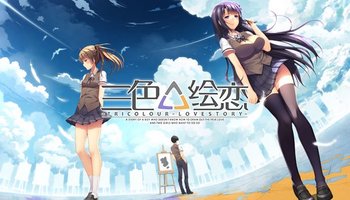 Daisy on the left, Violet on the right, Ashley in the background
Advertisement:

Tricolour Lovestory: A story of a boy who doesn't know how to draw out the true love and two girls who want to do so is a Visual Novel developed by HL-Galgame, and published by Sakura Game. It has a Steam release on September 20, 2017, and also has a Japanese PlayStation 4 release on August 29, 2019.

Ashley Chiu did not have a very happy upbringing. His parents disapproved of both his childhood sweetheart Daisy Mo and his artistic interests, going so far as to burn all of Ashley's sketchbooks chronicling happy memories. However, years later, his parents are called to the city on government work, leaving high school-aged Ashley alone and with freedom for the first time in his life. Eager to reinvent himself, Ashley enrolls in an art class for the next semester, and attempts to befriend a fellow transfer student named Violet. However, there are some elements of his past that he can't simply run away from, as he finds out when Daisy comes back into his life...

This work makes use of the following tropes: