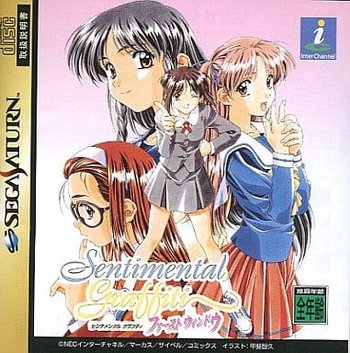 A Dating Sim where the goal is to unlock precious memories with anywhere between one to twelve girls; they each begin with a unique level of affection towards The Protagonist and grow fonder of him as they spend more time with him. If he is absent in their lives too long, he may encounter them at random during his travels or at his door if he chooses to sleep in; if, on the other hand, he skimps on a date with them, they suffer heartbreak and he can then choose to either beg for forgiveness or break off the romance.

The first game stars The Faceless Protagonist receiving a mysterious message in the mail saying only "I want to see you again"; it is revealed as the game progresses that he was a Military Brat who moved from town to town as a young man and met a new girl in each town. Depending on how the Protagonist schedules his weekends, he can get either a Just Friends or One True Pairing ending with each of the girls.

In the second game, the original Protagonist has suffered Sudden Sequel Death Syndrome and the new protagonist, an amateur photographer, interacts with the girls to try to convince one of them to become his model. It's not as well received as the first.

An animated adaptation called Sentimental Journey was made, each episode made from the perspective of each girl as they think of the role the protagonist played in their lives. A number of radio plays exist as well.

Character Sheet is under construction.

This game also has examples of:

The animated adaptation also has examples of: