Visual Novel / Don't Take It Personally, I Just Don't Like You 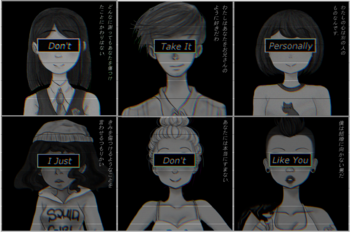 It's not them. It's you.
Advertisement:

Don't Take It Personally, I Just Don't Like You is an upcoming "lofi-anime" Dating Sim by indie developer De Coster. You're a college freshman with college freshman problems: you've got an awful professor, your roommate's kind of a flake, and this week really just hasn't been going your way. Luckily, you've got just the thing planned for this weekend: a date to the fall formal with the girl you've been (sorta?) seeing and your new (sorta?) friends. But things are never that easy...

A demo was released December 2019, with the full game slated for a late 2020 release date. The demo can be downloaded here

Don't Take It Personally, I Just Don't Like You contains examples of: