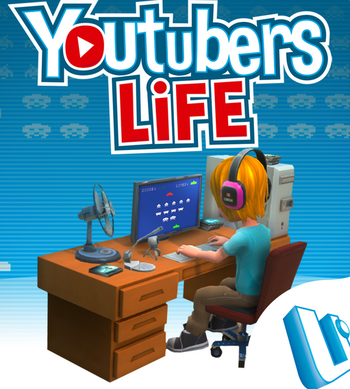 Youtubers Life is a life Simulation Game developed by the Spanish studio U-Play Online. It was released for PC through Steam on May 18th, 2016, and was then ported to iOS on September 22nd, 2016. Later on, an Updated Re-release Youtubers Life: OMG Edition was launched on November 20th, 2018 for Playstation 4, Xbox One and Nintendo Switch as well. On October 19th, a sequel was released.
Advertisement:

During the game, you start your career creating videos, editing them, and posting them on YouTube to earn money, but also have to study, take care of friends to have collaborators, and meet other YouTubers. Then, you can progress to your own apartment, hire an employee, create videos under contract with other companies, and create your own network.