Comic Book / Pantheon: The True Story of the Egyptian Deities 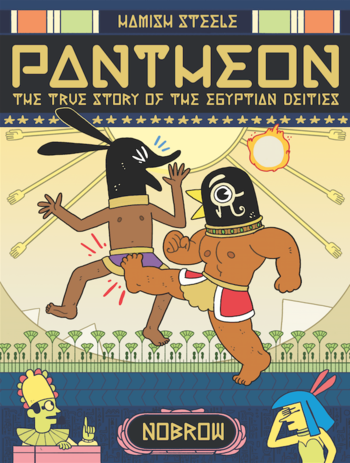 "On the Great Sea of Nu a pyramid named Benben rose from the water with silent purpose. Benben flowered a lotus... and the lotus flowered the sun. The sun rose up, signalling the dawn of the first day. And the sun named itself Amun. With only darkness for company, Atum did what anybody would do when faced with endless loneliness. He had a wank."

Pantheon: The True Story of the Egyptian Deities is a 2017 graphic novel by British freelance animation director and illustrator Hamish Steele.

The most important myth in Ancient Egypt is faithfully retold in glorious color! Horus, son of Isis, vows bloody revenge on his Uncle Set for the murder and usurpation of his Pharaoh father. Based on elements from various versions of the famous Osiris myth, Hamish Steele has resurrected this fantastic story in all its symbolic and humorous glory.