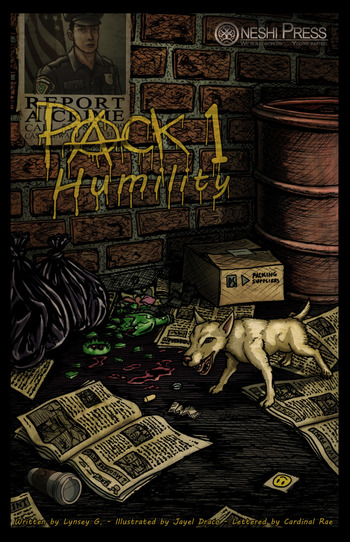 Pack is a planned seven-part Comic Book by Oneshi Press.

The streets of Brooklyn are a place where crime and corruption reign supreme. The cops who AREN'T on the take can probably be counted on one hand, politicians have their hands in every pocket the city has to offer, and the only true justice comes from one source.

Led by a mysterious masked vigilante known only by the name "Patience", the Pack is a group of dogs who mete out justice wherever it's deserved, usually in a pretty brutal fashion. Naturally, the corrupt presences in the city don't like that, and are willing to pull all the stops to put these dogs down.

The series is planned to have seven entries, with each member having their own Origin Story in each one. The comic is being funded on Kickstarter.